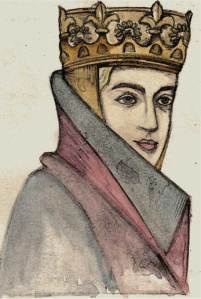 Uta von Ballenstedt (1000 – 1046) was born in the Harz region of Germany. She was of the House of Ascania, the Margravine of Meissen (a territorial state on the border of the Holy Roman Empire), and the wife of Eckard II.

And— cool factor—- she was the “model” for Disney’s evil queen from Snow White. However, she was not in the slightest bit evil. She had a happy marriage from what we can tell, but never had any children. She left her entire estate to the church- this vast fortune helped build the cathedral of Sts. Peter and Paul in Naumburg. When the cathedral was finished (13th century) Bishop Dietrich II honored Uta, her husband, and ten other nobles as founders by having life-size figures of them carved in limestone and placed at each end of the cathedral. These statues were created by an anonymous stonemason (bummer for him) and is simply known as “the master of Naumburg.”

She is widely known as the most beautiful woman of the German middle ages.