No. 9 on my list of favorite women from history: Eleanor of Aquitaine. Power, beauty, intelligence, military skills, a vast empire, patron of the arts…there’s not a lot NOT to like about the Queen Consort of France and England. Women in her presence were so ridiculously jealous and fearful, they often said she must be a witch to have that much power and beauty. Bitches have always been bitchy. *sigh*

Again- trying new styles and techniques with my illustrations and paintings. When I’m done, I’ll be asking you all which is your favorite. 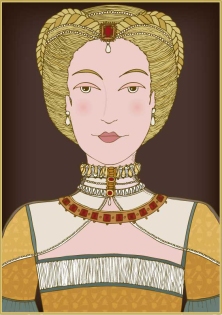 Diane de Poitiers (1499-1566) is one of the more powerful mistresses in France’s history. She was the courtier of not only Francis I but also his son Henry II. She is said to have been extraordinarily beautiful- well into her 50’s with golden hair and porcelain skin.

Diane’s attempts to stay young and beautiful for the young King Henry II (she was 20 years his senior) included drinkable gold. This was a common practice for women during the Renaissance as gold was thought to be the elixir of life as well as hold aphrodisiac properties.

Even more fascinating is the fact that her remains were exhumed and examined in 2009- it was determined that her bones and hair were very fragile and she had severe anemia- both signs of gold poisoning. On top of that– a lock of hair preserved at the Chateau d’Anet was tested, it contained 500 times the normal level of gold!

Now if you’ll excuse me, I need to go get more anti-aging cream, expensive hair conditioner, and a touch of botox for the wrinkle in my forehead.