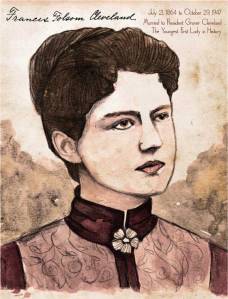 So I ran a poll on the HW Facebook page and got some GREAT suggestions for this month’s theme and I’m going with First Ladies of the United States. Rather fitting to kick it off on the Fourth of July.

First up is Frances Cleveland.

Some firsts for both:

– She was, and still is the youngest First Lady

– Their age difference (27 years) is the second largest of any Presidential marriage.

– She is the only first lady to preside at two non-consecutive administrations.

– She was the first Presidential Widow to remarry

Frances was quite a media sensation and became very popular during both terms. They had three daughters and two sons. When her husband died in 1908, she spent most of her time in Princeton, NJ and eventually married Thomas J. Preston Jr. in 1913. During the great depression, she led the Needlework Guild of America generating clothing for the poor. When she died in 1947 at the age of 83, she was buried next to her first husband the former President.