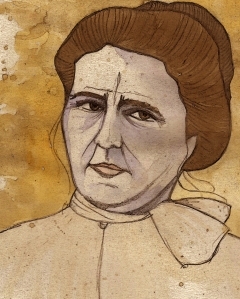 Oof. I’ve come across Belle Gunness’ story several times, but I never read through all the details. What a horror show.

Belle moved to the United States from Norway in 1881 and married Mads Ditlev Anton Sorenson in Chicago. They started a sweet shop which failed -and- burnt to the ground (suspicious). The couple collected the insurance money and moved. They had four children, one of which died under weird circumstances (probably poison). So… another insurance payment. Sorenson died in 1900- again, under suspicious circumstances (poison) and Belle collected ANOTHER insurance payment the day after his funeral. She took the money and moved to Indiana.

She then married Peter Gunness. Peter was recently widowed with an infant daughter. The daughter just happened to drown in a bath tub while alone with Belle. Shortly after, a meat grinder “accidentally” fell on Peter’s head, killing him instantly (MORE insurance money).

THEN… she starts running ads for suitors in the Chicago Daily Newspapers:

“comely widow who owns a large farm in one of the finest districts in La Porte County, Indiana, desires to make the acquaintance of a gentleman equally well provided, with view of joining fortunes. No replies by letter considered unless sender is willing to follow answer with personal visit. Triflers need not apply”

(I had to look up trifler- it’s a person who lacks experience and competence in an art or science.)

One applicant, John Moe, mysteriously disappeared after paying Gunness a visit. As did Ole Budsberg, Andrew Helgelien, and several other lonely, middle-aged men. Most of which had last been seen withdrawing money from area banks.

There’s a fire at the house. When the firemen arrived- four bodies were found in the house. One of the bodies was a headless woman (the head was never found). Her three surviving children died in their beds- and although the authorities immediately thought the headless woman was Gunness… it was most likely NOT. Belle was six feet tall and weighed 200 pounds. The woman from the fire was about 5’3″ and would not have weighed more than 150 pounds even WITH her head. Later- it was discovered that the organs of the headless woman contained deadly levels of strychnine.

After sifting through the burnt remains of the house- investigators found some teeth (with roots attached) a gold crown, and a porcelain tooth. The local dentist confirmed that this was all work he had performed on Gunness. BUT, her farmhand came forward with information that led people to believe she had put her own teeth by the body of her victim to fake her own death.

In 1908, the local police dug up Gunness’ farm (the hog pen) and discovered the bodies of 2 small children, along with Ole Budsberg, Thomas Lindboe, Henry Gurholdt, Olaf Svenherud, John Moe, Olaf Lindbloom, Jennie Olson and as many as 27 other possible victims, all of whom had, unfortunately, some sort of connection with Gunness.

Reports of Gunness Sightings came in from all over the United States- but nothing was verified. As late as 2007, forensic anthropologists exhumed the so-called remains of Belle from the fire. Their findings were inconclusive.

There are some HORRIBLE PHOTOS from the dig here (not for the squeamish):

Another article with more info here: