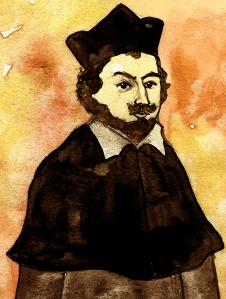 Urbain Grandier (1590-1634) was a French Catholic priest. He was burned at the stake after an event dubbed the “Loudun Possessions.”

Urbain was very outspoken against Clerical Celibacy- even wrote a book about it. He had a reputation of being a bit of a ladies man (thorn birds?) and in 1632 a group of nuns accused him of bewitching them and sending a demon called Asmodai. Asmodai, or Asmodeus, is the King of the Nine Hells, and sometimes known as one of the 7 princes of Hell- he is the prince of Lust, twisting his victims’ sexual desires. The nuns all claimed to have lusty thoughts and dreams, thanks to  Grandier. Methinks the nuns were drinking some Turnera Aphrodisiaca Tea (or being pressured by Mother Superior who was either attracted to or disgusted by Father Casanova.)

The philanderer priest made some powerful enemies when he pissed off Cardinal Richelieu (Chief Minister of France) and Mother Superior, Sister Jeanne of the Angels (heh.) They had him brought up on charges of witchcraft and even introduced a document that was supposedly signed by Grandier and all the demons he did business with. This document was deemed as a Diabolical Pact, and it is thought he signed this under extreme torture. It is an impressive piece of art written backwards in Latin and containing several mysterious signatures and symbols.

He was found guilty and sentenced to be burned- but not without going through the “extraordinary question” which was essentially water torture. For “Ordinary Question” the accused had 8 pints of water forced into the stomach- with the “Extraordinary Question” it was 16 pints. The latter was only used when the person was going to be immediately killed afterwards. Wow.

You can see the “diabolical pact” here: http://en.wikipedia.org/wiki/Urbain_Grandier#mediaviewer/File:UrbainPact2.jpg